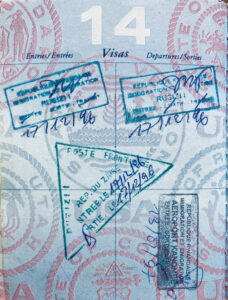 When Twins 1 & 2 were infants, I discovered that taking them outside on a chilly day would calm them. So I’d bundle them up and take them out in their stroller, a swank model with rugged tires. It was on these expeditions I learned that bumpy surfaces soothed them as well.

We’d go a few streets away to a small lane that curved up the side of a hill. It was in appalling neglect, with potholes of such frequency and depth it appeared to have received indirect fire.

I’d push them up and down the road, going into and out of the potholes. I probably looked like a madman, but believe me, it was being able to calm a brace of screaming infants that averted my madness.

One afternoon I was at my quasi-Sisyphean toil when I heard a mighty noise above. I looked up and saw a 747. It was ascending and making a turn, and I could see it perfectly in the clear October sky. It was Air Force One. I was awestruck. To this day it’s one of the most magnificent things I’ve ever seen.

In 1971, six years into his reign, Mobutu Sese Seko decided he wanted the Congo to have a new image. So he renamed it Zaire. Mobutu – the Marshal, as he called himself – ruled for about thirty years. Although his country was very poor, his focus was his own comfort. He built palaces, one with a runway to accommodate Concordes bringing delicacies from Paris. Mobutu fled power a few months before his death in 1997, but lived long enough to see his country – which was falling into the deadliest conflict since World War II – be again renamed, back to the Congo.

Notwithstanding his downfall, Mobutu was shrewd, and knew how to play people – and nations. (If you paid federal taxes back then, he sure got some.) All the while, he maintained both a risible grandiosity and a profound unconcern for his subjects.

…Mr. Mobutu said his European bank accounts held “less than $50 million. Is that such an exorbitant sum for someone who is, for the last 22 years, the head of state of such a great country?” he asked.

Critics reply that Zaire has pressing, unattended social needs. About one-third of the children die before the age of 5 in Zaire, which has a per capita income of $180, the eighth lowest in the world.

There are geographic terms that have metaphorical significance. Wild West indicates general lawlessness, and Byzantine unnecessary complexity. You probably, Gentle Reader, see where I’m going with this. In the past year, the word that came to mind – again and again – was Zaire.

More than once I felt like I was standing in a potholed road watching Air Force One fly by. And I was indeed in awe, but not in a good way.

About 15 years ago, when Iraq was in a state of civil war and New Orleans was in ruins and we were heading for the Great Recession, I read a book called Are We Rome? It was the kind of thing you wondered back then.

Last year, sometimes I’d think about writing Are We Zaire? It was mainly fear of descending into Casaubonesque folly that stopped me. Also, the answer is – if not always obviously – no.

You don’t hear much about the Congo these days, except maybe for stories like this: 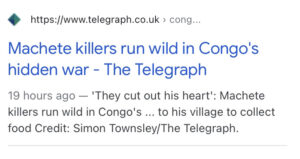 Then again, we have these kinds of headlines. I’ll let you decide which is worse. 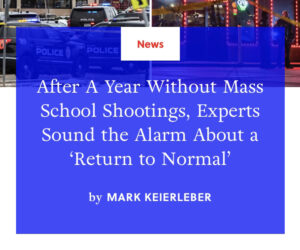 As for that road, they eventually patched it up and repaved it. It’s totally fine now. Who knows? Perhaps we too will similarly emerge.