Editor’s note: this post is about a British music magazine. If you think it’s about something else, take your tin foil hat back to Facebook. 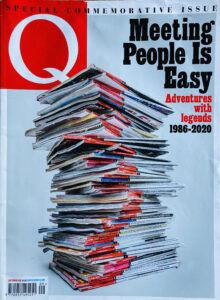 Last year I went into Harvard Square to look for the final issue of Q. I figured the Coop might have it. Nope. As the manager explained, magazines were sold in the cafe, but since the cafe was closed, magazines were not being sold.

We then chatted about where to buy magazines. Not so long ago, you had two great options in Harvard Square: Out of Town News and Crimson Corner. (The former is gone, the latter now pretty much only sells Harvard souvenirs.) He said, “Honestly, your best bet for magazines around here is CVS.”

I know this isn’t the biggest deal, given the ravages of a global pandemic, but: Harvard Square, and the only place to buy magazines is CVS…

So I ordered a copy off the Internet. It’s a slim thing, thrown together after the editors learned they’d gotten the axe. Rough way to go out. 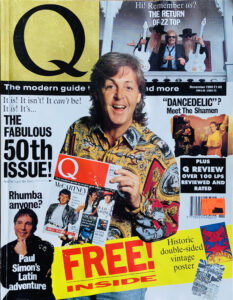 Q magazine. In my youth I loved it. I discovered it at the Li’l Peach in Cleveland Circle. It was unlike anything I was familiar with in the American press.

Every Rolling Stone issue had some long article decrying the tyranny of the Bush Sr administration, and then a handful of album reviews, which forever seemed to be: four stars for the new Joe Walsh album! etc.

Q always had scores of album reviews, terrific interviews (“Tom Hibbert has but one frosty inquiry“), and each one, at least in the early days, was – as we say in the teaching business – text-dense.

The writing was smart and erudite, and they took it seriously, but they were total smartasses, too. Here’s a sentence from a Brian Eno interview in the above issue:

The man who is about to release not one but two new albums in the very near future – his first direct assault on our wallets for five years – is adopting a characteristically oblique strategy for the necessary business of self promotion.

And the photo captions. I’ve never seen better. (My favorite, alas, is not repeatable here.)

When I moved to Seattle twenty years ago, I got rid of my old issues, and it pains me whenever I think of it. Man, I wish I still had them. They were so good. So long, Q. I owe my Anglophilia to you.

* Speaking of Seattle, First and Pike News is now also gone. So it goes.