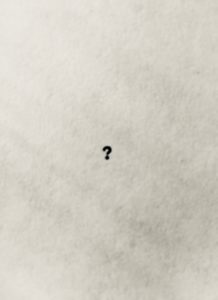 When I was doing teacher training in New York, one evening we had to attend a lecture by a panel of administrators. I remember two things. First was discovering the multiple galaxies of responsibility that principals have. (It’s bananas. I wouldn’t last a week.) Second was an Assistant Principal who ranted that if a student is ever absent, upon their return you absolutely had to demand “Where were you?” and make a big deal out of it. You should convey the absence was not only a detriment but an affront. I have tried to do this since.* (Obviously, alas, these days that trick isn’t much good.)

At SeaTac last summer, the TSA agent checking IDs all of a sudden knelt and, pointing at me, asked Twin 1: “Who’s this guy?” Then he asked her where we were going. He repeated these questions with Twin 2. He did it quite artfully – they thought he was being playful – but I realized he was making sure I wasn’t a kidnapper. I was really impressed. I even wrote the TSA, thanking them for doing this. I thought they mostly looked out for the combustibly shod.

Where were you? Who is he? Simple questions, powerful queries. Another that comes to mind is how, at the doctor’s office, they always ask “Do you feel safe at home?” What are some other good questions? Let me know. When I am king I shall increase my subjects’ weal by decreeing they be asked.

* E.g. if they say they missed the bus, I peer down at their shoes and say “Hmm. They seem OK. Is the problem with your feet?” This is hilarious!