This week’s Science class got me thinking about Frank Zappa. All I knew about him was that he was a good musician and that he’d given his children names that, uh, never made my shortlist. So I watched a documentary on him.

An interesting cat, to be sure, but I’m afraid music based on the chromatic scale is not my thing. A guy in the film decried how it’s dismissed as “wrong note music,” but that sounds (tee hee!) right to me.

I was impressed that, for his fifteenth birthday, Zappa asked to make a telephone call to Edgar Varèse (no, I’d never heard of him either). I think for my fifteenth birthday I asked for the “Armageddon It” cassingle. 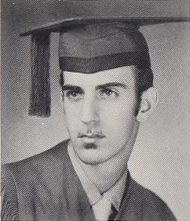 There was mention in the documentary of Eric Dolphy, which always reminds me of this passage in The Wind-Up Bird Chronicle by Haruki Murakami. Not only does it capture how I feel about the chromatic scale, it will sound right to those who’ve ever tried to chat with me:

It was as though we were speaking in different languages. If the Dalai Lama were on his deathbed and the jazz musician Eric Dolphy were to try to explain to him the importance of choosing one’s engine oil in accordance with changes in the sound of the bass clarinet, that exchange might have been more worthwhile and effective than my conversations with Noboru Wataya.