I keep a couple of favorite words in my back pocket – English words with a beautiful sound and a beguiling poetry. Everyone who cares even a little about language surely has their own list.

Mine has two words tied for first place: “evening” and “watershed.”

There’s a third word I never tire of hearing: “Touché!”

In terms of sound and etymology, “Touché!” wouldn’t be my favorite word in English, even if it were an English word. It isn’t even my favorite French word. It is, however, the very highest compliment you could possibly pay me.

Touché originated as a term in the elegant sport of fencing, acknowledging an opponent’s jab that has found its mark cleanly and effectively.

Likewise, in conversation, you’re using the same word to tell me: “I acknowledge that you have just insulted me, but you did so gently, and far from being offended, I’m smiling with marvel at how witty your remark was. You exposed something we both understood was true, and you did so in a spirit of teasing, not as a headbutt. I really should not want to laugh, but I must laugh, and for that I salute you.” 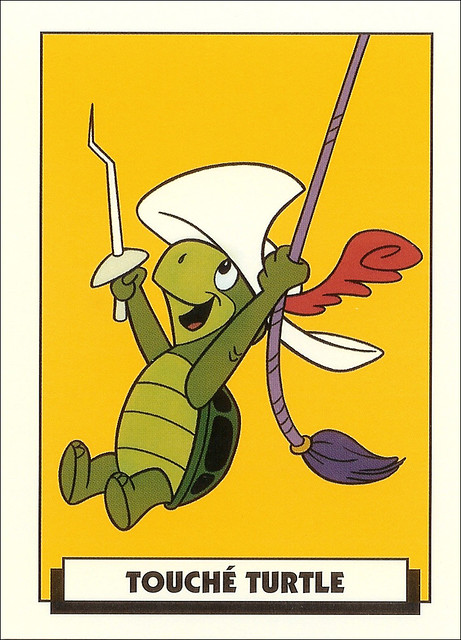 The word must always be presented alone, as if on a platter, and must always include the exclamation point. Strip away the exclamation point, and the word becomes something different: you’re acknowledging the gentle insult at your expense, all right, but you’re doing so peevishly, thereby robbing the word of its value, and far from defusing the insult, you’re making the explosion twice as powerful. But keep the exclamation point intact, and your “Touché!” is a gift, like verbally handing your insulter a hundred dollars.

I try to give this gift away as often as possible, and when a friend insults me gently but accurately, it’s a lyrical and fairly inexpensive way to say thanks, I’m in on the joke, and we’re good.

This was many years ago, and I still smile at the speed and accuracy of that dart. If I didn’t say “Touché!,” it’s only because I was laughing too hard.

For all of its potential value, though, “Touché!” is also a comment I almost never come across. Is it too old-fashioned, or is it just a matter of the word not being the typical first thing that comes to mind when you’ve just been teased?

To the best of my recollection, “Touché!” is a compliment I have never actually received – at least not for the correct services rendered. I’ve received the elusive “Touché!” only a couple of times in my life, and I won’t turn it down, but I still long to get the word as my thank-you card for a gentle zinger.

In fact, I can only think of only two occasions when I received the T word at all. It’s possible there were more of them before I started paying attention, but I remember these two:

At a small party, a friend is describing something to me in geographical terms. “Think of Ohio from the air as a gigantic farm,” she says.

Had her Ohio-reared husband overheard, that “touché!” would have been all the sweeter. Alas, he was at least two conversations away from us, beyond earshot.

A chat with my parents, just home from a two-week visit to Scandinavia. As we wrap up the phone call, my father says, somewhat inexplicably, “Well, welcome home – to me.”

I’d have been far happier had he garlanded me with a vaunted “Touché!” when telling me about a groundbreaking for a new hospital, “Built by your former college!” To which I replied, “With your former money!”

He did laugh, but I’ll admit it: a “Touché!” would have thrilled me then.

“Well-played, sir” is a close enough cousin of “Touché!” if not quite as generous a sentiment.

About a year ago while running errands one Saturday, I discovered that my college acquaintance Mike – known in those days, without exception, as Weasel – lived in the same neighborhood and that we used the same dry-cleaners. The next time I visited the shop, I asked Carlos, the owner of the store, to refer to my old friend as Weasel the next time he came in to drop off some shirts. Time passed.

Then one day, a text message from Mike: “I just saw Carlos at the dry-cleaners. Well-played, sir… well-played.” 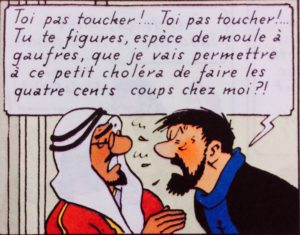 Speaking of college: I never did get a “Touché!” for what surely counts as possibly the best parry of my long career as a human being. During my college orientation week in Baltimore, I found myself talking briefly with one of countless students I met that week in what would prove to be both our first and last-ever conversation. After some chitchat, the guy asked where I’m from.

Uh-oh. He should not have said that to me, a very proud Washingtonian who had yet to discover the charms of Baltimore – and, as it happens, who never really would.

“Where are you from?” I asked, possibly sprinkling a few thousand Scoville units onto the question.

I took a chance: “All right! I love San Francisco!”

We both knew what I was about to say. I smirked and paused before I said it: “San Francisco, L.A. Same thing.”

With that, we quickly wrapped up the pleasant conversation. Over the next four years I spotted the guy from time to time but we never exchanged another word. To this day I still feel he owes me a weapons-grade “Touché!” for that.

I can also think of at least one instance when I didn’t get my “Touché!,” possibly for the better.

I’m in London working for a few weeks, taking the Tube home late one Monday evening. It’s a crowded train but silent and eye-contact-free. Suddenly two very drunk fellows board, chanting, “¡Campeon-es, campeon-es!” as if at a football match. As they would quickly let the entire car know, they had just won the pub’s quiz night, and clearly had already spent some of their prize money on refreshments.

Like everyone else on the train, I tried my best to become invisible, but they were seated next to me, and inevitably decided I would be the straight man in their comedy routine. They looked harmless at least. One of the drunk campeones asked me something, I don’t remember what, and when I replied, he reared back slightly, startled: “You’re an American! You look much too intelligent to be an American!”

“You look way too stupid to be British,” I replied, and the entire car roared with laughter. A couple of people actually applauded, and the drunks, red-faced and smiling sheepishly, got off at the next stop. A guy across from me reached towards me, hand outstretched. “That was brilliant, mate!”

No, that’s not true at all. That’s only what happened in the imaginary film version of that moment. In real life, I’m sorry to say, I wasn’t nearly so quick to smack that one back. (Another beloved French phrase: “esprit d’escalier”- that perfect reply that comes to you only after you’ve left your friend’s apartment and you’re descending the staircase to the street, or perhaps a year after that moment.)

In fact I was fairly insulted, and not in a joking way. I made a facial expression that made that clear, and the drunk campeones quickly changed the subject, though I remained their object of interest as we rode through several more long stops. I can’t help feeling, though, that the film version – “You look too stupid to be British!”- might have had a different ending entirely, one involving two drunk men and a singular British innovation known as a Glasgow Kiss.

Perhaps “Touché!” is also the French word meaning “That was funny, I like you, and I’ve decided I’m going to let you keep all of your teeth.” I’ll ponder that possibility as I keep struggling for this elusive verbal prize.

Note: as is obvious from the wit, wisdom, and text complexity, I didn’t write this post. My friend Jeff Pruzan did. He lives in New York City, where he has walked past Paul McCartney, written a play, and lunched with Jane Jacobs. His favorite French word is klaxonner.