A famous Australian children’s author was detained upon arrival at Los Angeles recently. She described the experience:

I have never in my life been spoken to with such insolence, treated with such disdain, with so many insults and with so much gratuitous impoliteness.

I haven’t read her books, but even if they’re that bad, this is no way to greet a visitor.

We Have Always Been At War With Australia

In 1942, the Allies slipped off their axis at the Battle of Brisbane. 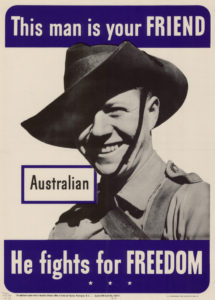 (There was also an unfriendly match next door at the Battle of Manners Street. Gotta go with the Kiwis on this one.)

When the world knows our fury, no worries, Australia fair:

We’ll save Australia
Don’t want to hurt no kangaroo
We’ll build an all-American amusement park there
They’ve got surfing, too.

(Paul Auster on Foster’s would be the converse, I guess.)