Up until last week, had you mentioned New Horizons, I’d have figured you were talking about day care or something.

Turns out it’s an interplanetary space probe launched ten years ago. I really need to quit skipping my NASA briefings. 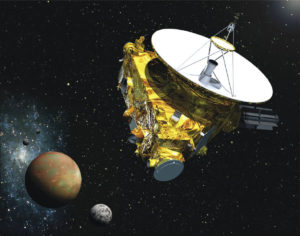 This short New York Times documentary on its mission is both fascinating and cheering.

Plus, it clears things up if you’re wondering whose are the first human remains to leave the solar system, or how to qualify as a planet.