With lots of preliminary throat-clearing about how humor is subjective and etc, this is kind of a funny story.

So, for this other thing, I had searched Twitter for the young adult author Walter Dean Myers. Which brought me to this: 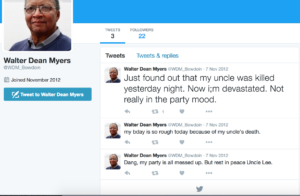 Tweet 1: Just found out that my uncle was killed yesterday night. Now I’m devastated. Not really in the party mood.

Tweet 2: My bday is so rough today because of my uncle’s death.

Tweet 3: Dang, my party is all messed up. But rest in peace Uncle Lee.

My first thought was: “Some poor soul [for the account was obviously not the author’s] took to Twitter, of all places, to voice grief, and met with the void’s embrace.” I found this saddening.

Second thought was: “This is the Twitter version of Hemingway’s six word novel!”

In fact, I even considered publicly directing attention to the account, I found it so remarkable.

Then I thought, ashamedly: “Good heavens, Peter, this is some poor soul’s grief, not a curio.” 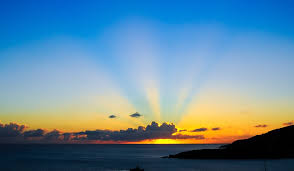 Now, though, I think it’s the latter.

The next day – my mind moves as Earth rotates, if at all – I remembered I’d once taught (!) Walter Dean Myers’ Bad Boy, in which he recounts the above incident.

So, some teacher had probably said: “Today, kids, we’re going to use technology! Tweet thrice The Sorrows of Young Walter!”

N.B. in the event I’m wrong this is not at all funny.

P.S. here’s the first Unhappy Birthday. And the one before that: