“For me it was easy: Produce text that was so good, an editor could not reject it,” he said.

Every couple years I search the internet to see if there’s any news from A Girl Called Eddy or Thom Jones. Tuesday’s obituary unhappily halves this task.

I owe much to Thom Jones. Although today regarded as astonishingly erudite, there was a youthful spell where I read no fiction. Then one day I was instructed – by a good woman who did what she could for my improvement – to read his short stories. Now not a week passes without me reading made-up stuff.

Years ago I had the great fortune to attend one of his readings. He began it by apologizing for his (perfectly fine) appearance and dedicating the event (with raised fist and no explanation) to his “homeboys in Attica.”

The line for book signing afterward was long, and the slowest I’ve ever seen. Thom Jones was talking to – as in having a conversation with – everyone. When my turn came, I was struck by how genial he was, and how interested he seemed. I don’t remember what we said, except that we talked about Africa, where we’d both spent time. 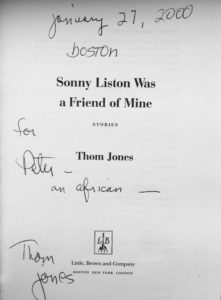 I met Thom Jones as a reader. Later, when I decided to try writing stories, he was my discouraging inspiration: half “You know, maybe I could do this,” and half “Yeah, but it ain’t gonna be this good.” I’m still right.

Rest in peace, sir. Glad I met you.

PS Erin, if you’re reading this, pretty please: we want You Get the Legs You’re Given, not your obituary. Or at least one well before the other.