Author’s note: with all the general ghastliness of late, I thought it worth leavening the proceedings. Grasp your sides in advance.

My friend has been encouraging me to read this book for years. Having finally picked it up, I sent him this text: 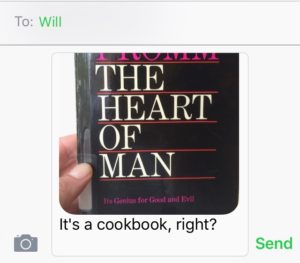 “O! Pete!” you cry. “Share more celestial wit, that we might not be obliged to thieve it!”

Alright. This next one’s pretty good. And anyone can do it, regardless of talent or genius.

Say you’re running a few minutes late to meet someone, and get a “Where are you?” text. You might be tempted to respond immediately and apologetically that you are en route. Oooh, don’t!

Wait until you’ve arrived outside the door. Then send a terse message like “Whoa. That’s tonight?” or “Thought we said Tuesday!?!” 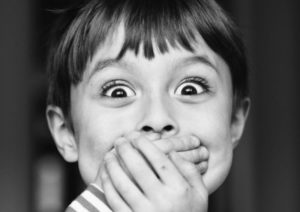 Now enter. I guarantee you’ll see whomever you’re meeting hunched over the phone, pecking away. Interrupt with a cheery “Gotcha!”

Personally, I like to gild the lily by sneaking up and tapping the meetee’s far shoulder. For some reason I don’t meet out with folks much, though.

This was unexpected. I’d turned on Caillou and retreated to sip my coffee in peace. But who knows, maybe this was the episode where he goes rogue, so I hustled back.

Turns out, Twin 2, bless her heart, had seen a bird on screen that, on a walk a few days prior, I’d pointed out as my favorite.