“I live on an air force base. I know what I’m talking about. If a plane manages to avoid radar detection up to its landing, it could land and come to a quiet halt at the end of a runway without anybody noticing.” -Major Ido Embar, Israeli Air Force 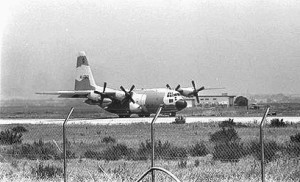 When I first started living near railroad tracks, passing trains would awaken me. Now they almost never do. Still, I can’t imagine how anyone could not notice a large plane landing nearby.

I just finished Operation Thunderbolt by Saul David, a heck of a tale about the Israeli rescue of hostages in Uganda. Major Embar’s above declaration is but one of many memorable details.

– One of the hijacked passengers had once decided to kill Klaus Barbie, and had a “gun hidden under a poncho when Barbie stopped three yards in front of him.”

– Henry Kissinger’s phone call to Israeli Ambassador Simcha Dinitz upon hearing that Israel was prepared to negotiate for the hostages’ release:

Dinitz: [Idi Amin] would have slaughtered them: men, women, and children.

Kissinger: I wonder if that would not have been better. Then you could react.

– This heart-stopping instant from the rescue itself: “Peled and Goren pointed their weapons and were squeezing their triggers when they realized it was a young girl. They jerked their weapons up just in time, and the bullets hit the wall above her.”

If you haven’t seen the documentary General Idi Amin Dada: No One Can Run Faster Than a Rifle Bullet, I recommend it. The scene where Amin directs a mock invasion of Israel came to mind more than once as I read David’s book.

One last thing about planes landing. When I was in Rwanda, there was an Air Zaire 737 parked on the runway in Cyangugu, a small town on the border with Zaire. Its pilot had mistakenly landed there instead of at the intended neighboring city, Bukavu. I remember a colleague telling me that when the plane arrived, everyone in town hastened to the airfield, so noticeable was the event.