The recent drop in temperature recalled to mind a reality TV show I once invented: Cold Enough for Ya?!

Premise: The host, who should be suitably disagreeable, drives around in a luxury automobile on a frigid winter day. Upon spotting someone waiting at a bus stop, trudging down an icy sidewalk, or performing manual labor, he pulls up alongside, rolls down the window, and shouts… well, you guessed it, didn’t you! Then he peels out, cackling all the way. Ideally, each episode would end with the luxury automobile being chased out of town by an angry mob. (Obviously the show’s summer season would be titled Hot Enough for Ya?! and maintain a similar spirit.)

Funny stuff, right? And that’s the one that ended up on the cutting room floor! The other one, you ask? Well, it’s in a short story I recently finished. You’ll have to read it there, whenever it comes out. (Unless you’re a network executive, in which case give me a call.) 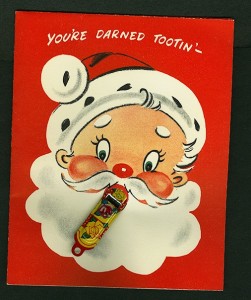 Now then. Here’s something that wasn’t funny at all. It happened a couple years ago. I’d spent the morning writing that very same short story (the gestational period of my stories averages about a term in the senate; a novel would take me centuries), and came home to find the latest issue of the New Yorker in the mail.

Upon reading the following passage, I threw the magazine across the room. (For, you see, much of that very morning had been spent writing dialogue in which one character addresses another as “Father Christmas.”)

Each time that Cilins flew from France to Guinea, he brought gifts—MP3 players, cell phones, perfumes—which he disbursed among his contacts. They came to think of him as “Father Christmas,” he told Fox.

I’ll pause while you roll down your window and shout “Coincidence enough for ya?!” But that’s all the head start you’re getting.